Legitimate Reasons To Be Jealous Of Tom Daley 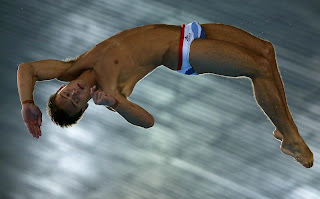 Tom Daley: Girls want him, guys want to be him, and let's face it quite a fair amount of us want him. And thinking about it, probably quite a few lesbians either want him or want to be him. However, some people want to send him nasty messages online, and bring up his dead father and basically be really horrible for seemingly one reason: jealousy.

I don't condone sending nasty messages, but I would be lying if I said I'm not insanely jealous of Tom Daley. What I'm going to try to do here is list all the reasons you could have for being supa jel of him, in the hope that if I can recognise all the reasons I have for being really jealous of him one by one then I will not feel the need to send him any online abuse. Here goes:

1. Look at that body. He's a very attractive thing. He has a good head or hair (actually so do I so this isn't particularly important for me) and a pretty face and he is muscly and toned in all the right places.

1. a. He can presumably have sex with literally anyone he wants. You wouldn't say no to that would you.

5. He's been to China. I really wanna go on holiday to China. Well actually I'd quite like to go all over Asia on a really long trip, and I can't do that for at least two years because I'm supposed to be doing a degree.

6. He got Kate Moss to pose for his GCSE photography project. I know it's nice to be gracious about some thing really good happening to someone you know, like someone I know filled out a survey and won an iPad and I would look like a bit of a lame-ass if I was visibly upset about this ... but just imagine how livid you would have been if you were in Tom Daley's class, you're 15 years old and working on your photography project and then you find out he's only gone and got the most famous model in the world. For a GCSE project.

7. He's a gay icon. The gays are obsessed with him and love him.


Reasons Not To Be Jealous:

1. He didn't get a medal yesterday. You probably didn't win an olympic gold yesterday either, but you probably knew you weren't going to. It wasn't a big disappointment for you or anything.

2. He's not very tall. He's 5'9 which is by no means short but I quite like being the height I am and I wouldn't want to be two inches shorter. But actually for diving he's a bit tall, as it's easier to spin round in a circle if you're shorter, so if he was my height then he'd definitely not be getting any medals. I'm now feeling very grateful I never pursued competitive diving as 'and then I got too tall and had to give it up' would be a rubbish story.

3. He got bullied at school after he was at the Beijing Olympics. This one can assume was stupid kids being jealous of him and dealing with their insecurity by teasing him.

4. He only has one living parent after his father died of cancer. Which is really sad and it must be horrible when some kid you've never met wants to bring this up to make you feel bad after you've just spent the day representing your country and didn't win.

5. The gays all think he's gay, which if you weren't gay would be sort of annoying. He probably is gay though. Tom if you're reading this and want to let me know, do drop me an email.

What Have We Learned:

2. There are pros and cons to being Tom Daley, like there are to being anyone.

3. I'm not sure exactly what else.

Anyway, here are some photos of Tom Daley showering where it looks a bit like he's getting up to some naughtiness, but presumably he isn't because if that was the case it would probably be quite the news story.