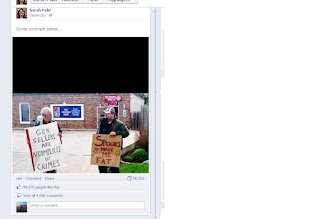 The very obvious issue of this is that if you get fat due to eating too much food, you have to hold yourself at least somewhat responsible for this. 'Spoons made me fat' would be a good point to make if you were arguing against gun companies and blaming them for people who use guns to commit suicide.

However, people who get shot are pretty unlikely to have consented to have their flesh ripped into by bullets. I would estimate that more than 99% of the people who get shot didn't actually want to get shot. Spoons made me fat is not an appropriate counterargument.

As for what would be a good counterargument, how about 'Cars ran me over'?

Except, even though cars do run a lot of people over all the time, this is rarely done on purpose. Cars are dangerous, they do injure and kill people, but this is not the reason people drive their cars. There's perhaps a benefit to society of us having cars. We could argue otherwise by invoking environmental reasons, but I can't imagine this would be of much interest to our dear Sarah Palin. 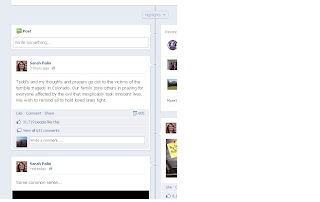 Some guy killed a load of people at a cinema. And I mean a LOAD of people. A total of 71 were shot, 10 killed at the scene and a further two so far dying from their injuries.

To Sarah Palin this is 'inexplicable'.

To Sarah Palin the idea of allowing any member of the public the right to carry lethal weapons with them has nothing to do with the fact that they might then use these to commit mass murder.

Now I am not saying we should live in a police state in which people aren't allowed to buy sets of kitchen knives in case they used these to attack other people, but it's very obvious that armed with guns, a mentally unhinged person can go totally fucking nuts and kill a lot of people in no time at all. And unless there are a large number of people with guns on them at all times ready to take him out, there's not much you can do except run and away and hide.

Knives are no less deadly than guns. Plenty of people have been killed by knives and swords and axes and hammers and crowbars and candlesticks and lead pipings. In the dining room, the hall and the study. And in the cinema. The phenomenon of  people using guns to go on murderous rampages is nothing new, from Columbine to Raoul Moat to Virginia Tech to Oakland and to Anders Breivik.

It's very fucking obvious that if you've got a gun then it's a lot easier to carry out this sort of act. You can kill a lot more people in a shorter space of time, and bystanders have far less chance of stopping you.

It is an unfortunate side-effect of human nature that sometimes some people snap and decide to kill a load of people. We can do our best as a society to stop this sort of thing happening by having access to mental health services and a strong criminal justice system. But even with this the best will in the world we cannot expect to prevent all incidents like this from happening.

People are unpredictable, and it would be impossible to spot every person who is five minutes away from plotting a dramatic mass murder. But what we can do, allowing that sometimes people will go nuts, is restict their access to firearms.

America is totally fucked up for thinking that if everyone has a handgun then they will somehow be safer. It's an arms race, and nobody benefits from it. There should be more stringent checks on who should or should not be allowed to own guns. This is not backed up by any sort of academic research, but is plain common sense. The rate of people getting shot in the UK is far lower than it is in the US. It's also a lot more difficult to get hold of a gun, and gun ownership is dramatically lower.

'Spoons made me fat' is of no comfort to the families of people shot down in cold blood. Some of the victims might have owned guns themselves, but some might have not. One thing is for certain: they did not ask to be murdered by a stranger while out at the cinema. My heart doesn't exactly bleed for the overweight person blaming spoons. The dead, on reflection, might consider the guns to blame.
Posted by T0m0akl3y at 01:15