Fun Things To Do At The GUM Clinic

OK so a while ago I got tested for STIs, and whilst waiting for my results to come back had an idea for a post. I then had to wait a few days before I could 'go to print', waiting of course for a text message from the NHS informing me that my results were clear. Writing a highly flippant and silly article about going to check whether you've got HIV/AIDS becomes a bit less funny if it turns out the punchline's that I've got HIV/AIDS.

But then by the time I got the all-clear I'd decided this post wasn't very good so tinkered with it a bit then left it in my drafts folder for a while then realised I haven't posted anything in bloody ages so I'm just going to serve this up regardless. The irony of the situation is that it's been so long since I got that all-clear it's almost time to go and get another test.

Anyway, getting tested is a bit of a grim experience for anyone but obviously kids if you're engage in such risky activities as having sex or occasionally eating in McDonalds then they're obviously something of a necessity every few months. So kids, go get yoself tested innit. But first have a read about a few ways in which you can make it more fun.

Skip The Queue
Tell reception that you're addicted to hard drugs, you share needles sometimes, and you get paid for sex. And easy as that, the hour and a half spent you would have spent reading magazines becomes a very small amount of time indeed

Camp It Up
You'll meet a nurse who you might never see again, which gives you a very special opportunity to construct an entirely false version of your personality. Consider it a free acting lesson or something. For me this usually means I become a character that's sort of like the impression of a gay man that a homophobic person would do. I am utterly ridiculous in a way that I don't think any of my friends or family would recognise.

But you could do whatever. The whole fandango takes about twenty minutes maximum, so just adopt whatever trait you want. A northern accent. A lisp. When they call your number, limp out of the waiting room and down the corridor. You can do whatever you want, and provided you can keep it going with a straight face, the nurse will not have a clue that you're faking. And even if she does suspect something, there's no way she'll be certain enough to tell you she thinks you don't really have a Russian accent.

(I'm just going to interrupt my flow here to acknowledge the fact that I have so far used female pronouns to describe the nurses at the GUM clinic. Of course this might sound kinda sexist, but thinking about it in my entire history of getting checked the nurse has always been female. There was this one time I was seen by a doctor, but she was female too. So either everyone who works in a GUM clinic is female, or maybe all the male nurses are checking out the female patients. And by writing that down, I've made it sound like going to get a medical check-up is a horribly sordid affair where all the staff are perverts. Sorry bout that.) 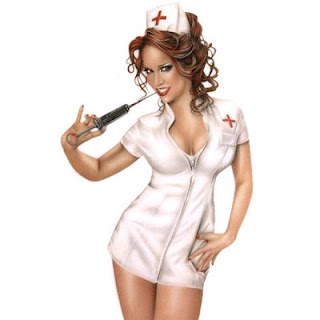 Lie About Your Sexual Partners
I don't really get why they need to know exactly how many sexual partners you've had, their gender or what you got up to. Well I kinda do because they swab you in different places depending on whether any of these have been in close contact with someone else's penis, but the nurses do like to keep track of everyone you've slept with, like a jealous ex.

Make The Nurse Your Agony Aunt
When they ask you about your sexual partners they also ask you whether you were in a monogamous relationship, if it was a casual affair or if it was a one-off. As you're recounting your list of dozens of made-up partners, why not add in a bit of emotional turmoil, to keep things interesting.

'Yeah, it was one-off. I really thought he really liked me, we had a lovely dinner and everything but then he didn't respond to my texts, I left three messages on his voicemail but he never returned my calls, I thought we could have been something.'

Burst into tears about your failed relationships. Question where it all went wrong. Bring up all the minor details of arguments you had months ago. Describe what your ex looks like and go into loads of details. Talk about his beautiful blue eyes and the way he used to smile at you, and how you used to feel like the luckiest girl in the world. And then say how he ditched you for your best mate.

Lie About Your Sexual Partners (Part 2)
Say you performed some kind of sex act on an inanimate object. Or an animal. Remember, everything is confidential so even if you claim to have done something totally illegal the worst that can happen is the nurse will scream and run out the room yelling about the crazy pervert in room 3

The Aeroplane Game
You know how parents persuade small babies to eat a bit of food off a spoon by pretending it's an aeroplane? Why not do the same thing as the nurse sticks a scratchy swabby thing up your urethra? This might actually be of more use for the nurses, and this would remind patients of their childhoods and would definitely make them feel less uneasy about having a swab rammed up their willies.

Any (or all) of these will surely lead to getting tested being a more fun way for anyone to spend a morning. Obviously safe sex is the way to go but there's nothing wrong with a bit I Must Somehow Still Have AIDS paranoia, even though you were wearing three condoms and did it standing up with the lights off on the first Tuesday of the month. Go get tested, kids. Oh and don't actually wear three condoms, one is enough.
Posted by T0m0akl3y at 16:30