I am the luckiest boy ever

Got me bike didn't I? Yay. Someone at Mansfield College spotted it and called Hertford about it and Hertford called me and yaaaaaay there it is. With a flat tyre, but a bike with a flat tyre is better than no bike. Having reconciled myself to never seeing it again, it has come as something of a great shock to be reunited. It has made me re-evalute everything that is great about it.

1. It looks cool
2. It is pretty lightweight
3. It's just the right size
4. It's pretty damn fast
5. It has some sickass 80s or 90s design on the handlebar griptape


Unfortunately the scumbag what stole it also decided to rip a load of the grippytape stuff off the handlebars, but no matter as I will wait til it's not really wet from being in the rain and then tape it back on with hockey stick tape. Yeah. Man I love this bike. 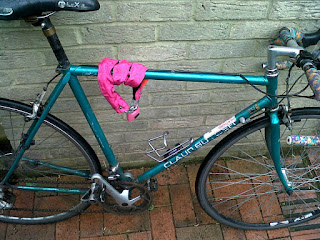 As a token of my love for it, I bought it a sexy new lock. Gone is the slightly flimsy combination lock it had before, and in it's place is this badboy. Not only does the pink look absolutely dashing against the green, the colour combo has something wonderfully defiant about it. I am not one for subtlety. A big part of me wants to leave my bike out the front of my house all the time specifically so whoever stole it sees it and feels bad, but the more sensible part of my brain has learnt its lesson so from now on it's living in the shed.

Another milestone was reached as for the first time ever, I managed to change a tyre without direct supervision from my father. Woo. I think this means I am now 'a man'. And not just any man. I am 'the man'. Just to justify myself a bit here in terms of this not happening before, my dad knows a lot of stuff about bikes and putting them together and changing bits on them and stuff like that, and thus can change a tyre really quickly. I have changed tyres before but have always made a point of timing it so that he's nearby and able to give me a hand should I need it. Or decide that I'm being too slow and it's easier if he takes over. Until now I haven't got any punctures whilst at university so it was pretty scary to attempt it with no safety net but yay I managed it. It took me forever and my fingers still haven't recovered but yay managed it didn't I yay.

For those readers who have never changed a tyre, here's a Blue Peter-style how-to.

One pain threshold
Twelve layers of skin on your thumbs.

Step 1: Push bit of tyre until your thumbs really hurt and have lost a layer of skin, eventually the tyre should come off
Step 2: Swap the inner tube
Step 3: Try to get the tyre back on the wheel
Step 4: Try again
Step 5: Keep trying
Step 6: Start bleeding from where your skin meets your thumbnail
Step 7: Push
Step 8: Push harder
Step 9: Have a brief out-of-body experience
Step 10: Finished. Stare at your mangled and blackened thumbs, catch your breath, wipe tears from your eyes using your sleeves

Ridiculous happiness in all directions, I have my bikey back and thanks loads to the people who helped me get it back. I had a brief moment when I sort of believed this was good karma. Which is pathetic, as I should have just been grateful for what happened and not filled my head with thoughts about supernatural forces rewarding me for being the fantastic person I obviously am. That and the fact I definitely have not been building up much good karma recently, so I'm now really worried that I'm building up a good karma deficit and something really bad is going to happen to me. A bit like when you're playing monopoly and you get the Chance card that says 'bank error in your favour', this was an undeserved karma windfall and I am literally terrified of what's going to happen next. Cancer perhaps.
Posted by T0m0akl3y at 18:27