Despite being inundated with opinions, I do not consider myself to be 'good' at politics. I'm good at political discussions, I'm pretty well-informed and am good at thinking of devil's advocate counterarguments, and sometimes when I'm arguing with someone I broadly agree with I can get very into my counterarguments if I feel like the other person isn't presenting their argument well enough. I can also be persuaded to change my mind a lot of the time but sometimes when there are really good arguments from both sides I get really confused and hate it when I don't know which side of the argument I agree with.

This leads me to think I am unlikely to ever be prime minister, despite what my ten-year-old self would have to say on the matter. (Aged ten I was pretty convinced otherwise.) Here are a few other reasons:

I nearly put 'excessive alcohol consumption' as a reason, but then remembered being something of a bon viveur never stopped Winston Churchill.

Why was I talking about politics? Oh yeah - vote Labour on Thursday innit.

I love the Labour party and have been a massive fan since before the 97 election. Although in the last few years this has been an unenthusiastic sort of love, a bit like someone experiences when thinking about their favourite band from their teenage years. I'm a Labour supporter, but not a zealous one. I'm quite a bit more leftwing on economic policy and I'm far more into the somewhat hippy-dippy notions of 'World Peace' and 'Civil Liberties' than the Labour party was in the years 2001-2010.

I don't want to write a really long defence of everything New Labour did when they were in power, but they did a hell of a lot of good for this country, a lot of which is now being reversed. They did a lot of good in state education, reducing NHS waiting lists, implementing the minimum wage, increasing foreign aid, gay rights, etc. But now: cutting funding for everything, putting us back into recession, still blaming the Labour party for the worldwide economic meltdown. George Osborne still says it's all Gordon Brown's fault.

In 2010 I got really overexcited about voting in my first general election. As well as taking a break from not revising for my A-levels in order to watch all the televised debates I read the manifestos of the three main parties, UKIP and the Greens. (I mostly read UKIP for a laugh, although it wasn't that funny in the end). It was all alittle bit futile as where I lived there was not a hope in hell that the incumbent conservative MP (a delightful Mr Peter Lilley) was going to lose. (Claiming 45.9% in 1997, 47.3% in 2001 and 49.9% in 2005. Not much chance.) My vote was worthless, but I was still going to vote.

Around this time the Lib Dems were doing very well at courting the youth vote (I still remember Clegg's shiny gold tie) and I was briefly tempted. I had a lot of sympathy for quite a few of their policies. But in the end when I got dressed to go to the polling station I saw my red scarf, red jeans, red trousers and red shoes, and couldn't resist putting them all on and voting red. Here's a photo of me reprising the same outfit at a later date: 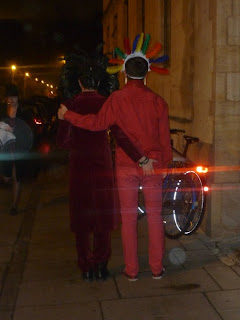 In all seriousness I didn't decide to vote Labour just for fashion reasons, it was because I genuinely thought they were and still are the best party to rule over us and control our lives. There are worse reasons for supporting Labour - there was an interview with Cheryl Cole I read in December 2009, in which she said the following:


"David Cameron. Brrrrr. Slippery isn't he? We've always been Labour in our family, it just feels wrong not to be. Better the devil you know."

I know 'Our Cheryl' is mostly famous for singing, punching toilet attendants and judging talent shows so maybe picking holes in her political rhetoric is a wasted effort, but who cares - what the actual fuck? That's the shittest reason I've ever heard for supporting a party. Voting Labour is not like supporting Newcastle United. I'm all for people voting, and if famous people are talking about politics that might encourage a few people to think about it a bit too, but for Christ's sake you can make a better case for voting Labour than that.

I've been half-arsedly writing this post for a few days now and suddenly today appeared this really good article by Polly Toynbee which does just that. It's a little bit unfortunate that it was written by Polly Toynbee, seeing as this is pretty much the same shit as she's always saying, but it's a damn good argument.

Especially what she has to say about Ken vs Boris. by all accounts Ken is not as amazing as some people make out (read this) but he does seem to actually do good when he's in office.

Just for God's sake go and vote. Vote Green if you like them more, vote tactically, even vote Lib Dem if this is actually likely to help keep the Tories out of local councils. The Tories need to take a battering. Smash the Tories. Tories are scum. Damn scum. Tory scum.
Posted by T0m0akl3y at 17:24