I have been the victim of a crime

My bike got stolen from out the front of my house on Abingdon Road in Oxford at some point on Saturday.

Here is a picture of what it looks like: 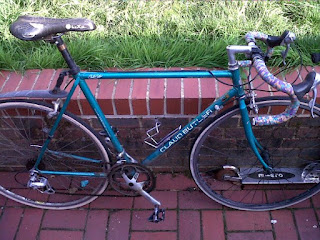 I am literally devastated. I loved that bike so much, it was a perfect lovely little bike, one of the reasons I loved it so much was that despite being really good it looked kinda old and crappy so therefore I reasoned it was unlikely to get stolen.

Right now, I'm losing all sense of proportionality, fairness or human decency. I feel a strong urge to walk down the road and approach the first cyclist I see, steal their bike and then throw them under a bus. Then once the bus has moved avay, steal their wallet, phone and anything else of value that they might have in their pockets. It is so unfair that my bike's been stolen. So. Unfair.

I'm going to do my best to ignore the evil voices in my head, but I'm going to have a quick moan about everything that's wrong with my life right now. I just googled the word 'catharsis' and it turns out that I was right and this is the word I'm thinking of. Writing down a list of everything that's shit about my current situation will allow me to see it all in proportion and perhaps deal with it.

1. Some bastard stole my bike
2. I lost my passport
3. I lost my copy of The Blind Assassin
4. I lost my sketchbook
5. My gums keep bleeding all day every day
6. My wisdom teeth are at it again
7. The pack of satsumas I bough the other day are mostly rubbish and taste of bin. only one of them so far has been nice
8. It's been a good year of me not getting any taller which means I am probably never going to be six foot tall
9. My torso has not miraculously decided to form itself into a six-pack. Despite the fact that summer is coming
10. I have exams in seven weeks and I'm hideously unprepared
11. My computer deleted all my internet favourites
12. My iPod died and Apple won't give me a new one for free, I have to pay a hundred quid
13. I still haven't got unpacked fully despite moving in to my room on Thursday last week

1. I just found my nail scissors (thought I'd lost them too)
2. It's lunchtime and I'm going to make a tasty spaghetti
3. My hair's looking quite nice at the moment
4. I might be going to a drinks thing at the Randolph this week
5. I ate lobster for dinner on Saturday
6. I'm famous and read my name in a (student) newspaper
.....

I know I should be trying to write a longer list of positives than negatives but I just can't do it right now. I want to wallow in misery for the time being. A really self-indulgent sort of misery. I'm going to spend all day avoiding human contact, or if forced to deal with people I will scowl at them until they ask me what the matter is, or if I'm feeling ill. (This is what happened yesterday, but today I'm going to do it on a conscious level.)

You try and be a nice person and happy and fun and caring but then someone steals your bike. I'm lowering my expectations from life. I'm going to grumble. I'm going to lie in bed and watch Jeremy Kyle. I'm going to eat lots of crisps, not shower, or get dressed properly. That's what I'm going to do.

Unless of course someone spots my bike anywhere - there is a really vague possibility that it wasn't actually stolen and that I went on a bike ride at some point on Saturday afternoon, locked up my bike and forgot where I left it. I've been racking my brains and talking to friends about what we did on Saturday and I'm 99% certain this isn't what happened (thus making someone stealing it in the middle of the night the more likely option) but if you see it anywhere around Oxford PLEASE LET ME KNOW.

/////EDIT: I just ate some lunch. The spaghetti was so good. And my friend Oscar is making a fish pie for dinner and it looks amazing. I'm feeling infinitely less miserable. Hooray. Now let's find that bike.
Posted by T0m0akl3y at 13:55