Hello, I'm just a fool who's willing to sit around 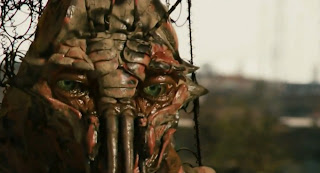 T'other week I had a lovely evening with a couple of friends watching that film about the aliens where instead of the aliens being aggressive invaders they've crash landed in South Africa and they just wanna try and go home.

For some reason it  made me think a little bit about my stance on animal charities, which is pretty much that I do not care at all. This isn't because I have no compassion for retired donkeys or abandoned cats and dogs, it's just that I have a lot more compassion for charities trying to help people - when there's so much human suffering in the world I really don't know how people can choose to prioritise giving money to animal charities. I suppose in a utopian world where there isn't famine, homelessness or cancer or HIV and we've all got big enough pensions that we aren't going to freeze to death in our living rooms, and hospices are properly funded and women's refuges are properly staffed - then let's open up a greyhound sanctuary and pat ourselves on the back for doing so. For now - whenever someone gives money to an animal charity then that's money that they could have given to a people charity.

I'm all about compassion and making the world a better place, but you've got to be objective and do a bit of cost-benefit analysis. Keeping hundreds of dogs alive - dogs that nobody wants to adopt because they're really vicious, and they're so vicious that they have to be kept in separate cages - or helping to build a school in a developing country. Which is going to do more good pound for pound?

I don't mean to act like I'm a massive philanthropist - as a student living entirely off government loans and university bursaries it's not as if the meagre amounts I give actually add up to a huge amount of income for charitable causes. But like how in an election you only get one vote, there's a finite amount of money that each person is likely/willing/able to give (delete as appropriate). We need to be shrewd about which causes we choose to support, and shouldn't let us ourselves think that as long as we're giving to charidee then it doesn't matter where our money's spent.

Animal charities are one sort that I think are rubbish, but you can cast a critical eye on plenty of others. When I was at school they had a non-uniform day where we all had to bring in a pound and go to an assembly about the charity it was raising money for. They'd bought a brand new PS2 to go in a London hospital wing where there were teenagers undergoing cancer treatment. Being a teenager and pumped full of chemo in a hospital does not sound like a lot of fun, and I don't begrudge them having a playstation. It must be mind-numbingly boring, not seeing your friends at school and not being able to go outside. A playstation game would help take your mind off this, and would stop you worrying about your health as much. In theory, I support the idea of playstations for teenage cancer patients.

But is this a charity I'd choose to give money to? No. For one thing, I wondered why the representative made such a big song and dance about them buying a "brand new" PS2 - it was 2004, and there were thousands of second-hand ones available for a fraction of the cost. But even if they had explained that they'd managed to get one for 40 quid off ebay, it would not be my chosen charity.

What wouldn't I choose? Playstations for kids who already have the NHS at their disposal. or Battersea Dogs Home.

This is of course ignoring the fact that my primary motive for giving money to charity is to keep the guilt I feel about being alive somewhat at bay. (For the sake of convenience we can blame this on my catholic upbringing.) Every now and then if I'm feeling ridiculously fortunate and privileged, the charity box might get a few pennies tipped its way, even if it's for something I wouldn't consider a priority usually. And of course, homeless people when it's raining. I know there might be people somewhere who could be less fortunate or more deserving of a quid, and maybe "they'll just spend it all on drugs". But when it's raining, and you're confronted by the realisation that unlike you, this person is not about to have access to a hot bath and a cup of tea, it's hard not to want to help.

I'm really, really worried that any of the above might sound like me showing off about me being such a caring spirit and how much money I give to noble causes. Let's be clear: that's not what I'm saying. I'm saying yeah we should give money to charity, but we should be picky about which ones ... unless it's a homeless person.

Or charity shops. I occasionally buy stuff I don't really need from charity shops, the kind of stuff I wouldn't dream of buying if it was from a normal shop, and I'm not all that picky about which ones I go to. Recently, I've been all about the CDs. I got this CD called 'Shirley Bassey Sings the Movies', where she sings her way through a load of songs from films. As in, songs by other people. Including 'Hopelessly Devoted to You' from the film Grease, which is really funny because the song just does not go with a Shirley Bassey-type voice, the production is awful and just about everything about it is god-awful. Which is what makes it so great, it came out in the mid-nighties while the Tories were still in power, it's got that really crappy optimism-on-a-budget plastic fantastic vibe to it. Some fool decided they didn't want it any more, and it was mine for 25p.

I really should shut up now, so I'll conclude. give money. Be picky. Unless to homeless people. Buy Shirley Bassey CDs. Yeah.
Posted by T0m0akl3y at 17:27