One of the primary ideas of feminism is that men and women are equal. In practice people can have loads of arguments about whether or not this is true, but usually people who argue men and women aren't equal are confusing the word 'equal' with 'exactly the same'. Broadly speaking there are quite a few differences between men and women, some related to biology and some perhaps influenced more by social factors, although it's unclear to what extent this might be so.

For example, in the UK most football fans are male. To what extent this is because football is 'naturally' more appealing to males than females is unclear. It may be that throughout childhood boys are encouraged to take an interest in playing and watching football to a far greater extent than girls to the point that this could totally explain the disparity. Or perhaps it's other factors - as a male-dominated space football might be openly hostile to women, or maybe men like being given the opportunity to run around being a football hooligan.

Even if you think those suggestions are totally wrong and the only possible explanation is in hormones and brain chemistry, it would be hard to argue that men and women aren't of equal worth as human beings. Not exactly rocket science.

Another obvious difference between men and women is apparent in their bodies. In many ways men are similar: they both have arms and legs and heads and shoulders and bums, but there are a few differences. Men tend to have a cock and balls, and women have something between their legs too terrifying to describe . Women also have long hair on their heads, and men have short hair  - oh wait a minute, I think that might be one of those social factor things I was talking about earlier. Maybe. Men and women both have nipples, women with breast tissue underneath and men without, although some men can develop a sort of chest cleavage of their own if they go to the gym loads. (See below.) 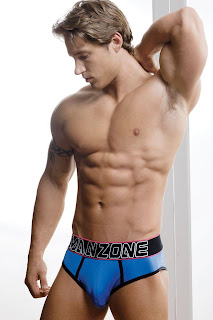 I don't know who this guy is, but I just found him on a Google image search for 'man in underwear', with the highest level of safesearch on. Looking at this, it reminds me of an image I saw plastered all over billboards a while ago. 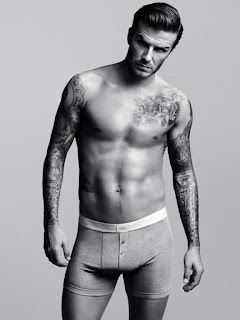 Oh yeah - an advert for pants. That we're happy to see plastered on shop windows and billboards, without provoking hysterical responses that these were supposed to be 'family shop windows' or 'family billboards', or that perhaps the seductive look in David Beckham's eye will lead to excessive horniness in adult women and the early sexualisation of young boys who will think they have to get loads of awful tattoos in order to emulate him.

Like I said, Page 3 is sexist. Defending it as 'a celebration of the beauty of youth' or something doesn't excuse the very obvious fact that if you choose to only celebrate the beauty of one gender then you're being sexist.

Categorising women's nipples as more obscene than men's does not help women. And if anything, makes life a lot more difficult for a subset of women: those with young children who wish to breastfeed in public. Women are routinely harassed for this by members of the public, or even by political columnists on Twitter.

Everyone knows print and broadcast media are still very sexist. If you want to get into the papers and you're a woman you have to be Kate Middleton or Madeleine McCann. Or Mary Beard, but only so that they can report the fact that people on a messageboard had photoshopped your face onto a vulva. TV comedy shows routinely have no women on a panel of six. Or congratulate themselves for occasionally having two women on a panel of six, despite the fact they also have a male host. BBC Radio Four regularly has more male guests than female ones. Even with Woman's Hour on six days a week, there are still far more male voices than female.

In this climate I can see why lots of women don't like Page 3. To them, it symbolises what's wrong with British media. The No More Page 3 campaign is gaining momentum, picking up media attention and even Rupert Murdoch has said maybe it's had its day.

Well, fine. As someone who only very rarely pays actual money for a print newspaper, and has probably been on holiday to Dorset more times than I've bought a copy of The Sun, I can't exactly say I'll miss it. Maybe some of its readers will, and they'll have to move to the Daily Star. Maybe for a while some feminists will make a point of buying The Sun to congratulate old Rupert on finally joining the sisterhood.

Will the nation have lost anything? No. But to me, this whole thing seems as much like puritanism as it does feminism.

I'm reminded of the scene in the pilot of Malcolm in the Middle, when a topless Lois opens the front door to a startled reaction from one of her son's teachers. "They're just boobs, lady," she says. "You see them in the mirror every morning, and I'm sure yours are a lot nicer than mine."
Posted by T0m0akl3y at 22:01