Fuck It I'm Writing A Recipe

I've been meaning to do some 'student cooking' recipes for a while. The general point was meant to be me showing off about what I'd cooked and how cheap it was and aren't I clever managing to eat such tasty food on a budget - well this meal fails miserably at that, because duck breasts are not cheap.

Some of this post was written yesterday, fresh from Tesco's and laden with shopping, after a rather eventful cycle ride as there's something wrong with my bike that means the pedals are only working about 50% of the time. I really should take it to the repair shop. I've since rewritten it, but some of the tenses might make no sense still, as I did my English GCSE five years ago and have since forgotten how to write. 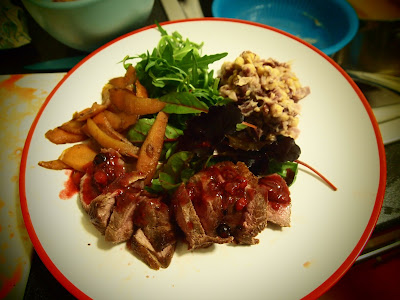 What We're Having For Dinner:

4 duck breasts (£8)
A bag of frozen mixed fruit (£1.50, or you could get just raspberries but that's £2)
Carrots (£1, you won't use all of them though)
A tin of chickpeas (80p - wtf is with this modern rip-off, when I was first year you could get 3 tins for a quid, maybe I should be buying dried chickpeas.)
-I wasn't even going to buy chickpeas, but Tesco was out of any white beans like haricots or butter beans.
A tin of value kidney beans (18p)
A red onion (18p)
A bag of baby leaf salad and rocket (Usually £1.50 but they have a 2 for £1 offer)

Optional: some red wine for the sauce. Or balsamic vinegar. I forgot to buy either of these and it turned out fine without them.

So it's £3 each - like I said this isn't amazingly cheap, but is only marginally more expensive than a McDonalds Happy Meal. IT doesn't come with a free toy though.

Finely dice the onion and fry. You want it to be nice and soft so do them on a medium-low heat. This might take a while, add a little bit of water to the pan if they look like they're about to dry out.

While the onion's cooking prepare your carrots. I wanted to go for thin strips so I did this using the slicer on the side of my cheesegrater. I used 3 decent sized carrots although you could probably do more.

Keeping an eye on the onions, drain your chickpeas and kidney beans, and rinse off the starchy water they've been sitting in.

When the onion looks about done add both tins then a couple of tablespoons of lemon juice and salt to taste. You want it to be quite sour but not overpowering.

Mash up the mixture in the pan. If you've got a potato masher it makes it a bit quicker but if not just use the side of a fork. You're not aiming for a smooth puree so don't worry if it's quite rough with a few whole ones in. At this point you might want to add some finely chopped fresh coriander for extra flavour. (I didn't bother, but it might be nice.)

You probably don't want to keep the mash on the heat for too long because it might start to dry out - once it's ready transfer it to a bowl. You can stick it in the microwave just before serving to warm up - I went for 'warm' as opposed to hot and I think it was pretty nice like that.

Get your duck breasts out the packet and cut slices into the skin, going through all the fat but not too deep into the flesh. Find your sharpest knife for this as otherwise it's a bit fiddly, and you'll want this knife again later for slicing up your breasts before serving. Rub some salt and pepper on both sides. 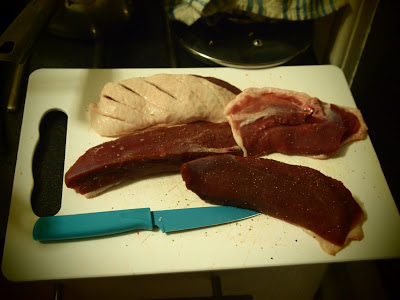 Add a big handful (maybe 100g) of frozen berries to a small  saucepan with some butter and sugar.  I basically guessed the proportions, scoop up a decent tablespoon of butter and shake some sugar out a packet. You want it to be quite sweet to balance the sour bean mash and the peppery flavour of the rocket, mine was probably a little bit sweet and I made a bit more than needed. But - you can use leftovers as a sauce for desserts, as long as you make sure you don't accidentally get any bits of duck in the pan.

Heat until the butter melts and the berries are all defrosted. They'll start to release juices but will mostly remain intact. If you wanted a smooth sauce you could pass this through a sieve to get rid of the seeds and the fibrousy bits, but I couldn't find one, and to be honest as you spoon the sauce over the duck you can just avoid the solid fruits if you want. Once it looks done take off the heat - you can warm it up just before serving. 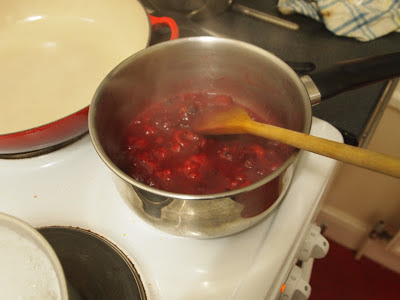 At this point I twiddled my thumbs for about 45 minutes as I was waiting for my friends to arrive and I didn't want to accidentally serve them cold duck breasts. The duck takes a lot longer than the sauce so if everyone you're cooking for is ready and waiting then you can get the duck on the heat before you start the sauce.

Get a nice big pan and put it on the highest heat. You don't need any oil as the layer of fat under the duck's skin will melt as the duck cooks. Wait until the pan's really hot then put in your breasts skin side down. Turn down the heat to medium and leave these for about 5 minutes until they've released loads of oil and the skin's starting to look a crispy golden-brown colour. Then turn them over. 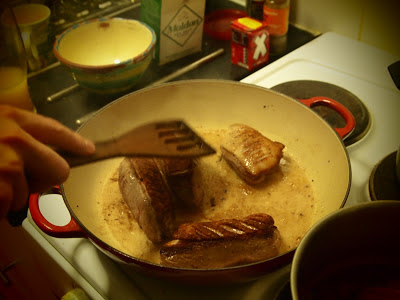 I pretty much had no idea how to tell how ready they were so I enlisted the help of my friend Oscar, who gave me the following advice:

Here's a picture of Oscar: 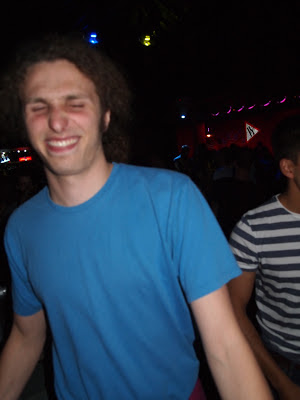 I haven't ever tried a totally raw bit of duck but I can't imagine it's all that delicious, so you want it to be reasonably cooked but still quite pink in the middle. Flip them every so often so they cook evenly and when they look done transfer to a chopping board and wrap in foil so they don't cool down too much.

Now fry your carrot strips. Chuck in a teaspoon of cumin and/or ground coriander to add some nice flavours. Don't fry them for too long - they'll be quite firm still and will absorb some of the flavour from the duck fat. I think if you fry them for too long they'll get really caramelised and be a bit too sweet.

While your carrots are in the pan prepare your plates: chuck some salad leaves on them and spoon out the bean mash. It might need a little whizz round the microwave first.

When you think the carrots look done take them off the heat, and put on top of some kitchen roll to absorb the excess oil. I think this is worth doing as it might end up a bit greasy otherwise. If you don't have kitchen roll then maybe use a clean tea towel that you can put in the wash after.

Use your sharp knife to slice up your duck breasts before serving.  Wash it first as you're not supposed to mix cooked meat with raw meat in case you die of food poisoning. I found it was easier to hold the breast in one hand and cut with the other instead of using a fork - you want the slices quite thin and it gets a bit fiddly.

Pretend you're on Materchef as you arrange the carrots and meat on top of the salad.

And finally - spoon over the sauce.