Why you should turn around and pick up that thing

A while ago I saw a bird's wing on the floor and initially thought it was going to give me a disease if I picked it up but then about 20 yards later I decided to turn around and pick it up. I now have a necklace pendant that is really cool. There is still some meat on the inside of the wing but it's all dried out like beef jerky and after hacking away at the jaggedy bit of bone that was sticking out it looks really good like.

Here is a picture: 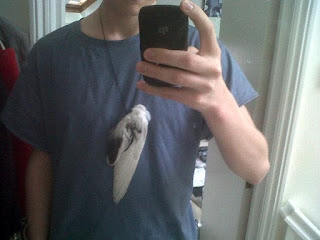 Today it was quite windy and it was flapping around lots in the wind because a bird's wing is pretty lightweight. This is not helped by the fact that it is only on a bit of string so I plan to try it out with a metal chain in the hope it will be less flappy. I've also recently taken to wearing a badger skull and a lobster claw. My friend Isabel said walking around with bits of dead animal hanging off your neck is an early warning sign that you might be a psycopath, but I pointed out that I didn't kill the bird, I'm assuming a cat got it. I just found its wing. And I can't even remember who found the badger skull but that's been sat on a shelf in my room for ages. But then I remembered it was actually me who killed the lobster, but this was mostly so we could eat lobsters for food.

Here is one of the six lobsters I killed, back when it was alive: 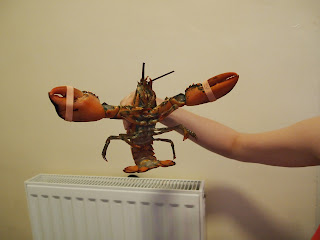 Here is a wanky still life composition we created: 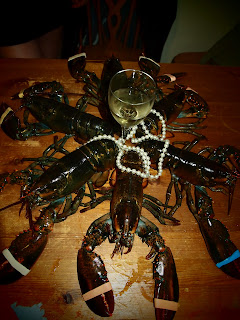 Here it is after I cooked it: 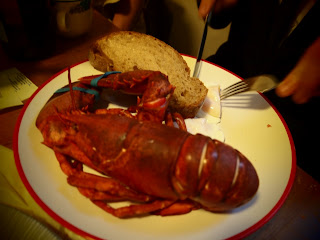 Here is my necklace accessory: 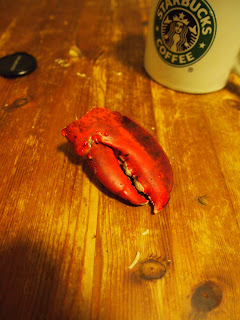 Yeah. Anyway pick up bits of dead animals you find in the road and kill lobsters. That's my advice part 1.

Pick up that phone you see in the road. I saw a phone in the road yesterday on the way to my French class, initially cycled past it but then decided it was worth turning round to pick up before a bus ran over it. This was on that bit of road diagonally opposite to the Randolph Hotel where there are lots of buses, in the end it was me who nearly got run over but I survived.

I didn't have time to call before my class so waited til an hour later, for some reason it didn't occur to me to look in the contacts menu first and I raced into the text messages folder and had already skimmed through a load of texts deciding who would be the best person to call before it occurred to me that this was sort of invading someone's privacy. But maaaan some of these texts were funny.

Here is one, I took this picture on my phone and it didn't come out very good: 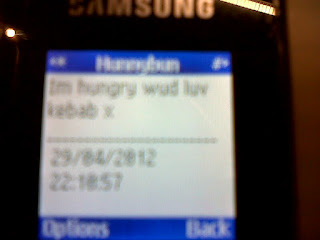 In case you don't have as super-sharp vision as me, this says "Im hungry wud luv kebab x" and is from Hunnybun. I spoke to Hunnybun and arranged to speak to Herbie and then Herbie gave me a call and I managed to track down the owner of the phone to the pub, where I was treated like a sort of king. There were three of them there, two middle-aged men with really thick Irish accents and one woman who was also Irish but was able to act as a sort of interpreter. They'd misheard me on the phone and thought my name was Bob and after a while I gave up trying to explain that I was actually called Tom.

They were lovely and bought me a pint of Guinness and we had a nice chat and then ran out of things to say and I ran away because as I'd gone in the pub I saw a few of my friends sat outside so I went and said hello to them.

Now this is not just a long anecdote. I, like Jesus, rarely tell a long old anecdote unless it is an anecdote with a meaning, or, as they are often called, a parable. And you might have guessed what the meaning is here (the clue is in the title) but what it is is this: turn around and pick up that thing you saw on the floor.

Sometimes when you've already walked past it you might think ah well I've gone past it now it doesn't matter I'll just keep walking now left foot right foot but no! DON'T DO THIS. Turn around. And pick up that thing.
Posted by T0m0akl3y at 14:23