"Thoughts" not about politics

Today has been a good day for Labour generally but not in London because nobody likes Ken. To be honest, I have doubts about Ken being particularly great and he's got a bit of an image problem to say the least, but let's not dwell on that and let's think about other more pressing issues.

What they don't tell you about athletes foot medication: nowhere on the packet does it point out how much your foot will start to hurt once you put the cream on it. My foot had been peacefully rotting away for about a week when I finally got round to trying to cure it, and now it hurts. A lot. Next time I get a bacterial infection on my foot I intend to wait until it's a choice between rubbing cream on it or amputation, because having a stingy foot is not fun.

Another thing: today I have been listening to the Eurythmics Greatest Hits album. I have never really given much thought as to whether the Eurythmics are better than Blondie or not, but I'll tell you one thing. Greatest Hits by Eurythmics is a better album than The Best of Blondie, which I also bought a while back. The Best of Blondie really starts to drill after a while, and it's not the sort of album to play all the way through. Which is not to say I think Annie Lennox is any more or less badass than Debbie Harry, because they're obviously both totally badass.

Another thing: a big shout-out and thank you to my friend James who decided to buy me a massive tyre lever after I whined about my thumbs hurting when changing a tyre. It's the biggest tyre lever I've ever seen. It is huge. And in the spirit of hinting at getting presents from my friends after they read on here that I might appreciate something, I want to tell you this, dearest James. I wish I had a car, so then I could take you on a day out to the seaside. Also, if I had a 42-inch plasma screen then we could watch high-definition blu-rays on the high-definition blu-ray DVD player that I don't currently own either but wish I did. And if I had an iPad then I'd totally be beating your score on that game you love so much.

Here's a picture of James: 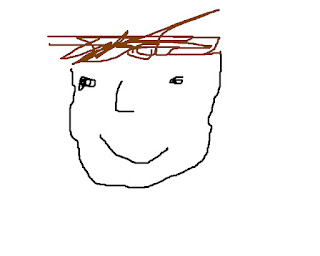 After my friend Charlie sent me a cease and desist for posting photos of her on here I've decided it might be an easier option to just use the medium of MS Paint. She's a right killjoy that Charlie. Although about half an hour ago I got her good, in that I read out a joke which was 'What's the difference between a bus and the BNP?' 'A bus has seats' ... Charlie then kept asking the initial question over and over except changing the word 'bus' for 'car' then 'train' then 'plane' then 'coach'. I'd had enough so told her if she did it again I'd pour beer on her, and she did it again so I poured beer on her.

But it was in a can and I didn't want to pour much on her so I decided to take a little sip into my mouth then drop a bit out onto her. This was a mixture of being considerate (I didn't want to pour that much beer on her) and blind self-interest (beer ain't cheap). It didn't occur to me until she said so that this would look like I'd decided to spit on her. Now obviously a little bit of saliva mixed in but she's had her tongue down my throat enough times that I thought she wouldn't mind. Once I'd actually explained that it wasn't spit and was just beer (as promised) she was so relieved that I then had the weird experience of being thanked for spitting beer. On one of my best friends.