Let Me Be Ur Fantasy

What up fanboys - it's been a while. I've spent the last few weeks "working" "hard" for "my" "exams". Essentially I am very unimpressed with the Oxford selection process as basically there must be someone out there who is actually clever enough to be doing a degree in engineering, and I've got their place instead of them. But, in fairness to my tutors, I was wearing a nice jumper on the day of my interview, and I had my round glasses on that make me look like a massive fuck off nerd, so it wasn't for them to know.

Yeah so I finished my exams and got trashed (your friends wait outside exam schools and attack you with party hats and glitter, or if you're my sister you lob a two litre bottle of coke all over me (Last year I got her with fizzy water, which is not only not full of sticky sugar, it also didn't stain her clothes. Thanks Flo.)) then we got in some beers and got rather tip-say sat on my college lawn AND THEN something pretty cool happened.

Well, a couple of things. I went to Oxford Pride, which was lots of fun. It was in a field, behind the ice rink, and there was a stage, a bar, and a stall selling tat covered in rainbow flags along with badges with clever slogans like '100% bitch' or 'fuck off' written on them. And there was a bar, and a row of portaloos. And a burger van. I hope I'm really setting the scene here, but in case I'm not here are some photos I took: 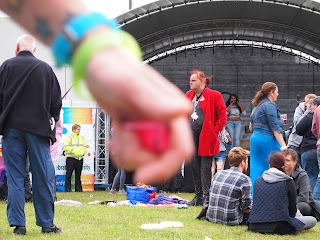 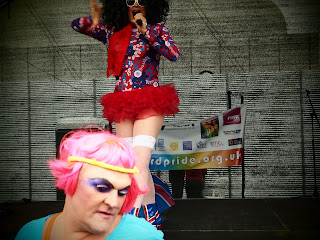 After splurging my life's savings on badges I watched some drag queens sing songs and make jokes about the fact that they didn't have real boobs and I think there was talk of selling them on ebay to raise money for Madonna tickets although I might have just made this up. I also met at least one person from the TV show 'My Transsexual Summer' although they'd brought a load of friends with them so I might have mainly been hanging out with non-famous transsexual people. But whatever, they were nice. 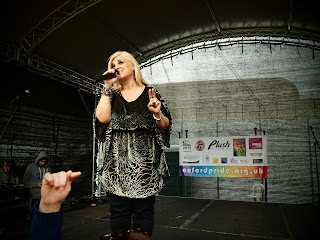 I've been pretty appalled at the reaction of most people I've told this story to so far, in that instead of their face lighting up into an expression of profound disbelief and perhaps slight jealousy, they've looked at me and said the following:

Which means I have to start singing the song. The song that was a massive underground club hit in 1992, topped the charts in 1994, and then got rereleased in 2000, albeit as a sort of awful garage remix. You may have guessed it, the song is called Let Me Be Your Fantasy. And it's amazing. Here it is:

I remember in 2000 and seeing it on Top of the Pops, and thinking it was godawful and not the sort of thing I could possibly enjoy. But my tastes have changed to appreciate Britain's contribution to crap 90s culture, and this song definitely has a place in my heart.

For one thing, the lyrics are hilarious.


I'll take you up to the highest heights
Let's spread our wings and fly away
Surround you with love that's pure delight
Release your spirit, set you free
Come and feel my energy
Let's be as one in soul and mind
I'll fill your world with ecstacy
Touch all your dreams way down inside
Let me be your fantasy

Ridiculously cheesy, and a little bit subversive. So obviously you can read this as a straight up love song, but you'd have to be pretty naive not to notice the fact that it's also clearly hinting at the idea of getting off your tits on a load of drugs and dancing all night.

And what's so fun about it is the way it's so sort of humourless. It's all done with such a straight face, no knowing winks and hint hint nudge nudge, no - it's the most sincere thing you're ever likely to hear. As to the actual performance, well Baby D sang two songs. She started with that old one about changing your heart and looking around you (which will astound you apparently), which is obviously a good song and kinda nice but I'd be lying if I said the audience wasn't waiting impatiently for the main event.

It was sort of really poignant and moving. And I don't think I'm even taking the piss when I say this. The song's 20 years old and the woman who sings it is not a world-famous popstar. One can only guess as to what she's been up to all these years. She might have got married, she might have got divorced, she might have kids, she might have a boring job like a normal person and only sing occasionally at weekends or she might be touring a load of small (presumably mostly gay) venues all the time. I don't know.

Going to see someone sing live is a bit like going to a museum, in that you're witnessing a bit of pop culture history. And it was really interesting to see someone who'd made her mark on the cultural landscape but you wouldn't look twice at if you walked past her in Tesco. Her five minutes of proper fame is clearly over, but seeing her sing wasn't like watching someone desperately trying to cling on to their celebrity status, she looked like she was singing  for the sheer joy of it. She said something along the lines of 'Thanks so much Oxford for having me, it means so much for me to come here and sing my song to all of you', and she came across as a genuinely lovely person.

I came away feeling strangely elated. Being a pop star is clearly a very fun job, and I'm gradually coming to terms with the fact that I am never going to be a pop star, due to the fact I have no musical talent and also can't sing very well. I truly felt like I'd learned something.

The parallel I'm trying to draw between being briefly successful as a pop star and then fading into obscurity and my realisation that I'm crap at my degree subject is maybe a little weak, but I had slight philosophical epiphany. If Baby D is still singing her heart out after 20 years with a big smile on her face, then I would be a fool to let something like getting crap results in my second year exams dampen my spirits. And hey, I don't even have my results back yet so for all I know they might not be as crap as I'm expecting. Woo. The power of positive thought.