On A Fallen Ceiling

My housemate woke up to discover a massive chunk of her ceiling had fallen in, filling the room with white dust and setting off the fire alarm. While the room is being repaired she's been moved to another room in the house.

Her room faces onto the road and has a big bay window, which the curtains have been removed from. This means every time I come into the house I'm greeted by the view of the work happening in her room like a continually-updated art installation which reminds me of this piece by Tracey Emin: 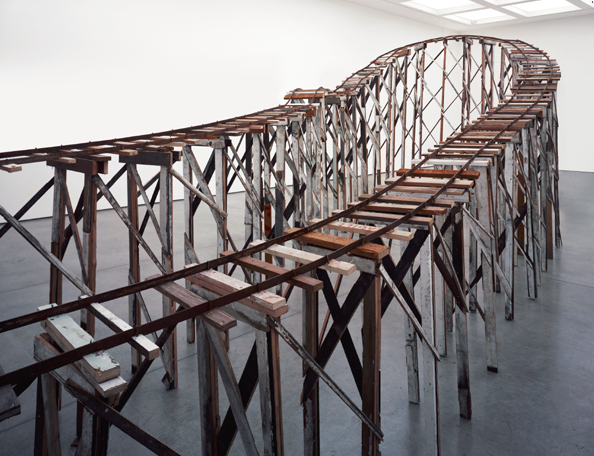 This huge work recreates the roller-coaster at Margate's 'Dreamland' fairground. The fairground was a central part of Emin's youth: it was exciting, seedy and sexually charged.

In an interview with The Observer Emin, 42, recounted "When I was 16 I used to let boys finger me on that roller-coaster. It was a rickety old wooden antique, and it took ages to to reach the top. I could always reach orgasm on the downhill sections."

"Once I tried wanking a boy off on it, but cos we were going seventy miles an hour or something it was too cold for him to stay hard. And he was so shit-scared of heights he almost threw up. I sucked him off under the pier after though."
Posted by T0m0akl3y at 21:18